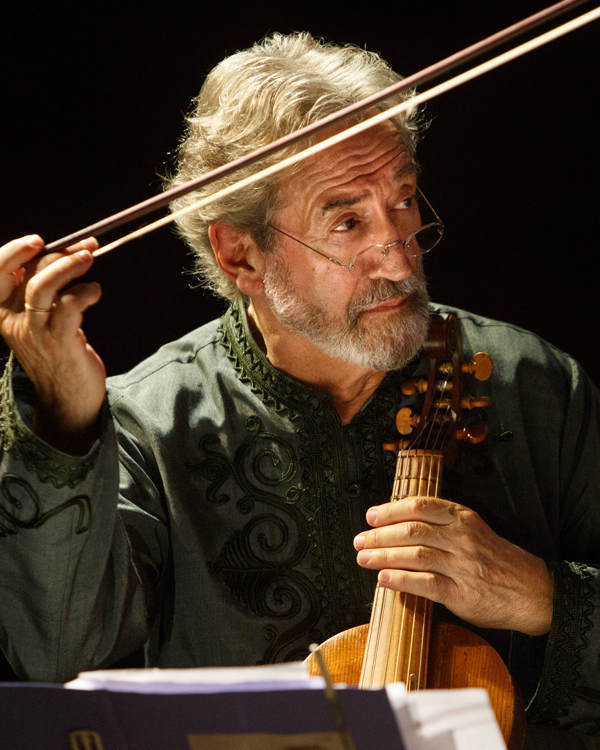 “Jordi Savall testifies to a common cultural inheritance of infinite variety. He is a man for our time” (The Guardian).

Jordi Savall is one of the most versatile musical personalities of his generation. For more than 50 years, he has rescued musical gems from the obscurity of neglect and oblivion and given them back for all to enjoy. A tireless researcher into early music, he interprets and performs the repertory both as a gambist and a conductor. His activities as a concert performer, teacher, researcher and creator of new musical and cultural projects have made him a leading figure in the reappraisal of historical music. Together with Montserrat Figueras, he founded the ensembles Hespèrion XXI (1974), La Capella Reial de Catalunya (1987) and Le Concert des Nations (1989), with whom he explores and creates a world of emotion and beauty shared with millions of early-music enthusiasts around the world.

With his key participation in Alain Corneau’s film Tous les Matins du Monde (awarded the César Cinema Prize for the Best Soundtrack), his intense concert activity (about 140 concerts per year), his record releases (six recordings per year), and the creation in 1998, together with Montserrat Figueras, of his own record label, Alia Vox, Savall has shown that early music does not have to be elitist, but rather that it appeals to an increasingly wide and diverse audience of all age groups.

Savall has recorded and released more than 230 discs covering the Medieval, Renaissance, Baroque, and Classical music repertories, with a special focus on the Hispanic and Mediterranean musical heritage, receiving awards and distinctions such as the Midem Classical Award, the International Classical Music Award, and the Grammy Award. His concert programs have made music an instrument of mediation to achieve understanding and peace between different and sometimes warring peoples and cultures. Accordingly, guest artists appearing with his ensembles include Arab, Israeli, Turkish, Greek, Armenian, Afghan, Mexican, and North American musicians. In 2008, Savall was appointed European Union Ambassador for intercultural dialogue and, together with Montserrat Figueras, an “Artist for Peace” under the UNESCO “Good Will Ambassadors” program.

Between 2020 and 2021, to mark Ludwig van Beethoven’s 250th anniversary, Savall conducted the complete symphonies with Le Concert des Nations and recorded them on two CDs entitled Beethoven Révolution. The impact they have had in the record market worldwide has been defined as “a miracle” (Fanfare), and Volume II has been distinguished with the Schallplattenkritik Prize for the best orchestral record.

Savall’s prolific musical career has brought him the highest national and international distinctions, including honorary doctorates from the universities of Evora (Portugal), Barcelona (Catalonia), Louvain (Belgium), and Basel (Switzerland); the order of Chevalier de la Légion d’Honneur (France); the Praetorius Music Prize awarded by the Ministry of Culture and Science of Lower Saxony; the Gold Medal of the Generalitat of Catalonia; the Helena Vaz da Silva Award and the prestigious Léonie Sonning Prize, which is considered the Nobel Prize of the music world. This year, Savall was elected an honorary member by the Royal Philharmonic Society, the Royal Swedish Academy of Music, and la Accademia Nazionale di Santa Cecilia.