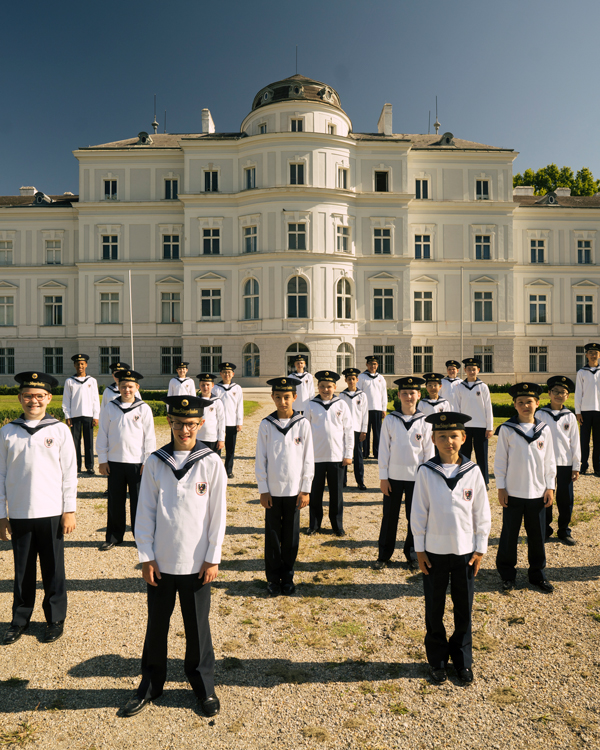 The Vienna Boys Choir is one of the most famous choirs in the world, and one of its oldest: Boys have been singing at Vienna’s Imperial Chapel at least since 1296. In 1498, Emperor Maximilian I moved his court to Vienna, where he established the Chapel Imperial and the Vienna Boys Choir. Over the centuries, the court attracted musicians like Wolfgang Amadeus Mozart and Anton Bruckner; Joseph Haydn, Michael Haydn, and Franz Schubert were themselves choirboys. Until 1918, the boys sang exclusively for the court.

In 1924, the choir was reestablished as a private, nonprofit organization.

Today, the Vienna Boys Choir maintains its own campus, with a primary school, a middle school, and a senior high school program. The middle school is attended by 100 boy choristers between the ages of nine and 14. The boys are divided into four choirs. Each group spends 10 weeks of the school year on tour. Between them, the choirs give around 300 concerts each year, attended by almost half a million spectators around the world. Since 1924, 2,750 choristers have taken part in over 1,000 tours in 100 different countries.

On Sundays, one of the choirs performs with the Vienna Philharmonic Orchestra and the State Opera Chorus in Vienna’s Imperial Chapel, as it has done for the past 524 years.

The choir performs with major orchestras, conducted by the likes of Joana
Mallwitz, Zubin Mehta, Riccardo Muti, Christian Thielemann, and Simone Young. Highlights include appearances at the Vienna Philharmonic’s New Year’s Concert and at the Salzburg Festival.

Since their first recording in 1907, the boys have recorded 377 albums, LPs, and CDs. Numerous films and documentaries attest to the choir’s international appeal. In 2004, the Vienna Girls Choir was founded to give girls the same musical education and the same musical experiences. Thirty girls are enrolled in this program today.

In 2009, the choir teamed up with the Vienna Konzerthaus and Caritas Vienna to found Superar to provide children in and around the city with access to music; since then, the choir regularly joins Superar in concerts.

Three hundred boys and girls attend the choir’s schools. A third of the students go on to become music professionals.

The Vienna Boys Choir is a registered charity; its singing tradition is listed by UNESCO as an intangible cultural heritage in Austria. Professor Gerald Wirth, himself a former choirboy, is the organization’s President and Artistic Director.