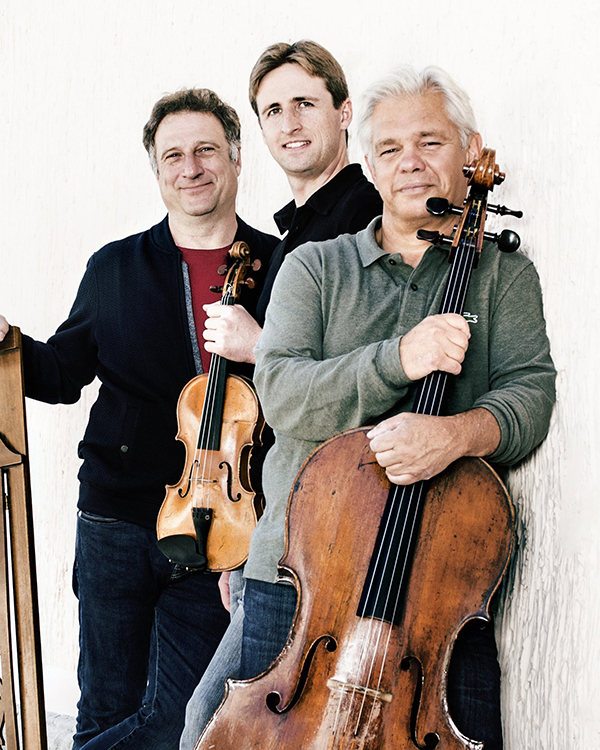 Tonight’s performance is part of the Vienna Piano Trio’s Farewell Tour of North America. After an outstanding career as one of the world’s leading chamber music ensembles for more than three decades, the trio has decided to retire at the end of the current season.

The Vienna Piano Trio was founded in 1988 by the Viennese pianist Stefan Mendl. His partners are the Californian violinist David McCar­roll, a member since 2015, and the Austrian cellist Clemens Hagen, who joined in 2018.

Together, the players embody the ensemble’s commitment to bridging the traditions and practice of Europe and America. This philosophy stems from the trio’s early years and mentoring by such ensembles as the Trio di Trieste, Haydn-Trio Wien, Beaux Arts Trio, and the Guarneri and LaSalle quartets, and by the violinists Isaac Stern and Jaime Laredo.

Sustaining and expanding the repertoire for piano trio, the ensemble complements the masterworks of the 18th to 20th centuries with new works, the product of collaborations with leading contemporary composers such as Friedrich Cerha, Georg Friedrich Haas, György Kurtág, Johannes Maria Staud, and Jörg Widmann.

The Vienna Piano Trio has been a regular visitor to the world’s major concert halls. In North America, the group has appeared in, among others, New York City (Lincoln Center, Weill Recital Hall, Frick Collection, 92nd St Y) and Washington, DC (Library of Congress, Ken­nedy Center, National Gallery), as well as in Boston, Philadelphia, Baltimore, Cleveland, Chicago, Houston, Los Angeles, Seattle, Van­couver, Toronto, Ottawa, Montreal, and Mexico City. Since the 2006–07 season, the trio has had its own subscription series at the Vienna Kon­zerthaus.

The trio’s extensive prize-winning discography on the Naxos, Nimbus, and MDG labels embraces the complete piano trios of Brahms, Dvořák, Saint-Saëns, Schönberg/Steuermann, Schubert, Tchaikovsky and Zemlinsky, as well as works by Beethoven, Haydn, Ravel, Schu­mann, and others. The Penguin Guide to Recorded Classical Music described their Schu­bert as “outstanding in every way…wonderfully fresh and spring-like…true chamber-music-making by a beautifully matched team,” while its Dvořák led the Washington Post to write of “an almost transcendent experience.” The trio won the Echo Klassik award for 2010 and 2017 and the Opus Klassik for 2020.