Cal Performances audiences will recognize Aaron Diehl as the pianist and music director for many of Cécile McLorin Salvant’s ensembles, and from several appearances this past year in the Now, More than Ever blog. He returns this season for his Berkeley debut as a bandleader, leading his own trio in a new project showcasing his fluency in both classical repertoire and jazz improvisation. As a concert soloist, Diehl performed Gershwin’s Piano Concerto in F with the New York Philharmonic and the Cleveland Orchestra several seasons ago, and critics have raved over his meticulously styled recordings, which combine original compositions with jazz tunes by John Lewis and Sir Roland Hanna and concert works by Philip Glass and Sergei Prokofiev. With Mirror, the pianist explores the affinities of the counterpoint in Bach’s music with bebop vocabulary, interspersing solo selections from The Well-Tempered Clavier with original compositions for jazz trio in corresponding keys. 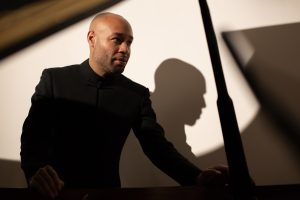