The Alvin Ailey American Dance Theater has been performing annually in Berkeley for more than half a century—appearing at Zellerbach Hall more than any other place in the world outside of New York City. Following its video performance for Cal Performances at Home in June 2021, the Ailey dancers return—in person again after two long years—as the company resumes its annual residency with programs that uplift and inspire. Under the leadership of Robert Battle, the Alvin Ailey American Dance Theater continues to embody the legacy of its founder by celebrating artistic excellence, unbounded creativity, and the power of art to transform and engage. Expect new works by young voices like Resident Choreographer Jamar Roberts, placed in conversation with timeless classics like Ailey’s own Revelations (1960). 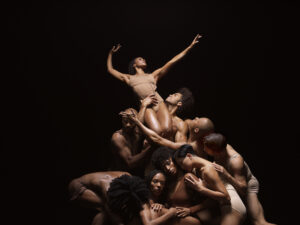