Musician brothers Ilmar Gavilán and Aldo López-Gavilán grew up together as young prodigies in Havana in the 1970s. At 14, Ilmar was sent to the former Soviet Union to continue his violin studies, eventually settling as an adult in New York, where he founded the Grammy-winning Harlem Quartet. Younger brother Aldo remained in Cuba after training in London, and was mentored by the island’s revered jazz and classical piano masters, his significant talent achieving renown internationally but eluding wider recognition in the States due to the 60-year-old US embargo on Cuba. Reunited (and the subject of a 2020 documentary film, Los Hermanos/The Brothers), the brothers play compositions by Aldo, recorded on their duo release Hermanos, that weave together chamber sonorities with Afro-Cuban jazz and folk forms.

This performance is part of Cal Performances’ Illuminations: “Place and Displacement” series. 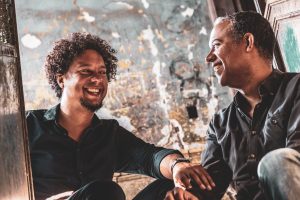