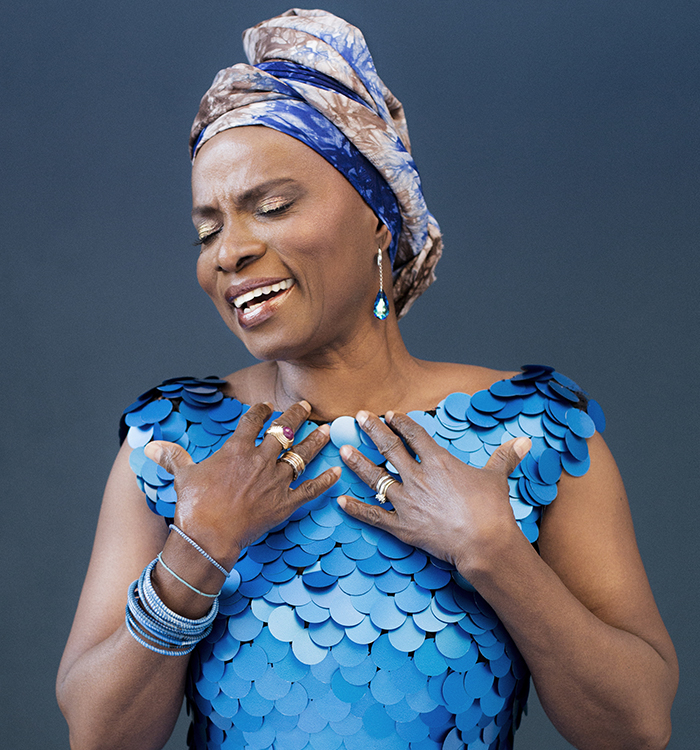 This year, Cal Performances welcomes singer, composer, activist, and humanitarian Angélique Kidjo as the organization’s first season-long artist-in-residence, visiting for two performances and participating in an array of public programs and collaborations with students, faculty, and campus partners. A formidable presence on international stages, Kidjo is a four-time Grammy winner and was recently named one of Time magazine’s “100 Most Influential People of 2021” for her work as a performer, mentor, and cultural ambassador. The Benin-born singer has been honored for her activist work by the World Economic Forum and Amnesty International, and was included on the BBC’s list of Africa’s 50 most iconic figures and the Guardian’s list of the “Top 100 Most Inspiring Women in the World.” For her latest recording, Mother Nature, released earlier this year, she joins forces with some of the most captivating young creators of West African music, Afrobeat, Afro-pop, hip hop, and R&B, the results reflecting a newly heightened awareness of Kidjo’s own musical legacy and the remarkable influence she has had on younger generations.

In Berkeley, Kidjo performs her unique take on the Talking Heads’ seminal 1980 album Remain in Light at tonight’s concert; she returns to campus in the spring with the Bay Area premiere of Yemandja: A Story of Africa, a new musical theater production co-commissioned by Cal Performances, on Saturday April 23 at 8pm at Zellerbach Hall. Yemandja is presented as part of the 2021–22 season’s Illuminations: “Place and Displacement” series, which explores effects of migration and gentrification on individuals and communities through a wide variety of performances, public programs, and academic encounters.

“One of the great pleasures this season is welcoming Angélique Kidjo, who hasn’t appeared here in nearly a decade, back to Berkeley as our first season-long artist-in-residence,” said Jeremy Geffen, Cal Performances’ executive and artistic director. “Having been a presenter, collaborator, and fan of her work for years, I know firsthand of her passion, conviction, and boundless curiosity. She brings inextinguishable energy—more so than most of her more junior colleagues, actually!—to bear in both her performances and her community outreach work.

“As an immigrant who fled a dictatorship in her home country of Benin,” Geffen continues, “Angélique draws from her personal experiences a deep sense of conviction as well as profound passion for exploring the breadth and depth of the human experience—qualities that make her the perfect partner for our season-long Illuminations programming. And most importantly, she comes to our campus hoping to learn as much as to share. By inviting her to meet with faculty and students, Cal Per­formances reinforces and supports the university’s interest in cultivating and sustaining a diverse, equitable, informed, inclusive, and accessible community.”

Kidjo anticipates working closely with students, remarking: “I want to know more about the driving force behind UC Berkeley students—how they see the future, how we can share the road with them, and how they can educate us—because they are living in a world changing faster than anything we have seen before.” She continues, “What is interesting for me as a mother, artist, and citizen of this world, is the question, ‘How do we create a better world for one another, within all these challenges we are facing?’ We are going to have a great time together this season, but also come out of this with something substantial to build our future on.”

During her campus visits, Kidjo will work closely with students, faculty, and a host of campus partners in a series of academic collaborations and public programs rooted in issues close to her heart, including questions of equity in the fields of technology and data collection. Her residency this fall has already included interactions with students at the Haas School of Business, the Mastercard Foundation Scholars, and others. Two panel discussions with UC Berkeley faculty took place on Thursday, October 28, both free and open to the public:

Both sessions were recorded on video and are now available for viewing on the Beyond the Stage page.

Kidjo returns during the spring semester to perform the Bay Area premiere of her Cal Performances-commissioned Yemandja: A Story of Africa. Named after a Yoruban deity, Yemandja is Kidjo’s first foray into musical theater, a parable about gods and humans that explores through song what happens when people are robbed of their culture. In this fully staged production—directed by Chicago-based director, actor, and playwright Cheryl Lynn Bruce and featuring stage design by the revered contemporary painter Kerry James Marshall—Kidjo plans to explore themes of love, betrayal, honor, and revenge against the backdrop of slavery in 19th-century West Africa, singing a libretto written by her daughter, Naïma Hebrail Kidjo, sand supported by a full cast of musicians, singers, dancers, and actors.

Yemandja: A Story of Africa has been co-commissioned by Cal Performances, Arts Emerson, the Broad Stage at Santa Monica College, Ruth and Stephen Hendel, the Kennedy Center, and MASS MoCA.